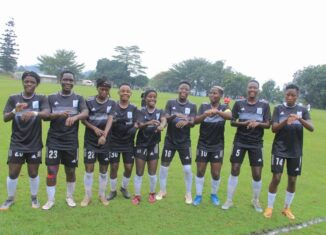 Kampala Queens maintained their brilliant start to the season securing their eighth successive victory as the first round of the 2022/23 FUFA Women Super League campaign reached the penultimate stage over the weekend.

In a closely contested game against Kawempe Muslim, Kampala Queens showed character to secure a 1-0 win at Kabojja thanks to Resty Nanziri penalty in the 16th minute.

The win meant Kampala Queens moved to 24 points and stretched their unbeaten run to 25 games and coincidentally, it was Kawempe Muslim that last defeated the former with the loss coming on the opening day of last season.

On Saturday, Uganda Martyrs had to come from a goal down to pick maximum points off a much improved Lady Doves side. Dorcus Kwikiriza gave the Masindi based outfit a lead the break but goals from Sumaya Nalumu aka Fresh Kid and captain Catherine Nagadya guided the home side to victory.

Uganda Martyrs remain second on the log with 16 points same as UCU Lady Cardinals who edged Olila High School in a five-goal thriller.

Rines SS played out a goalless draw at She Corporate to remain unbeaten the last two games. They secured their first win against SHE MAK last weekend.

The first round will climax next weekend before the teams go for a two and half- month break. The second round will start on 5th February 2023.